How to Identify and Test Fake SD Cards

Beware of fake SD cards and avoid Being Scammed!

First of all, I felt the need to write this article, mainly to share my experience on this topic. I was really scammed and I want to help the readers of this post not to fall into the same mistake as me. The last thing you want in the middle of an important shoot is to lose all your work. Or, worse, your client’s work. Well you can think that the price was with a big difference from the normal prices, but actually it wasn’t, maybe around 10€ less. Anyway, in the announcement they only had original SanDisk photos and the seller’s raking (registered as a company) was normal, so I didn’t suspect it and made the purchase on the ebay.

So what happens when you have a fake / counterfeit memory card? Well, the issues can range from getting very slow speeds all the way to data loss and unusable memory cards. Out of all the potential issues, data loss is the biggest risk, especially when a large capacity memory card is used.

The problem with fake memory cards, is that many photographers might not understand that once they go over a certain capacity, all data from that point on will be corrupt, because the cards where “cracked” to show the total capacity that you purchase, but in reality, they have much less storage capacity than advertised.

So everything might appear to be working great at first, until the troubles show up later. This is especially problematic when photographers plan expensive trips where memory cards fail after a few days of use. So the biggest risk one might run into, is loss of data – that’s where you don’t want to end up! This is why it is especially important to identify fake memory cards.

How to Identify a Fake Memory Card

If you have already purchased a memory card, there are a few things you can inspect and basic tests you can run in order to identify a fake memory card:

First, start by inspecting the packaging of the memory card, if you still have it. If it looks very cheap with odd, inconsistent printing and no seals, that could be the first sign of a fake card.

As soon as I received the order the first red flag came out! The SD card packaging was a universal plastic box like as shown in the image on the right. 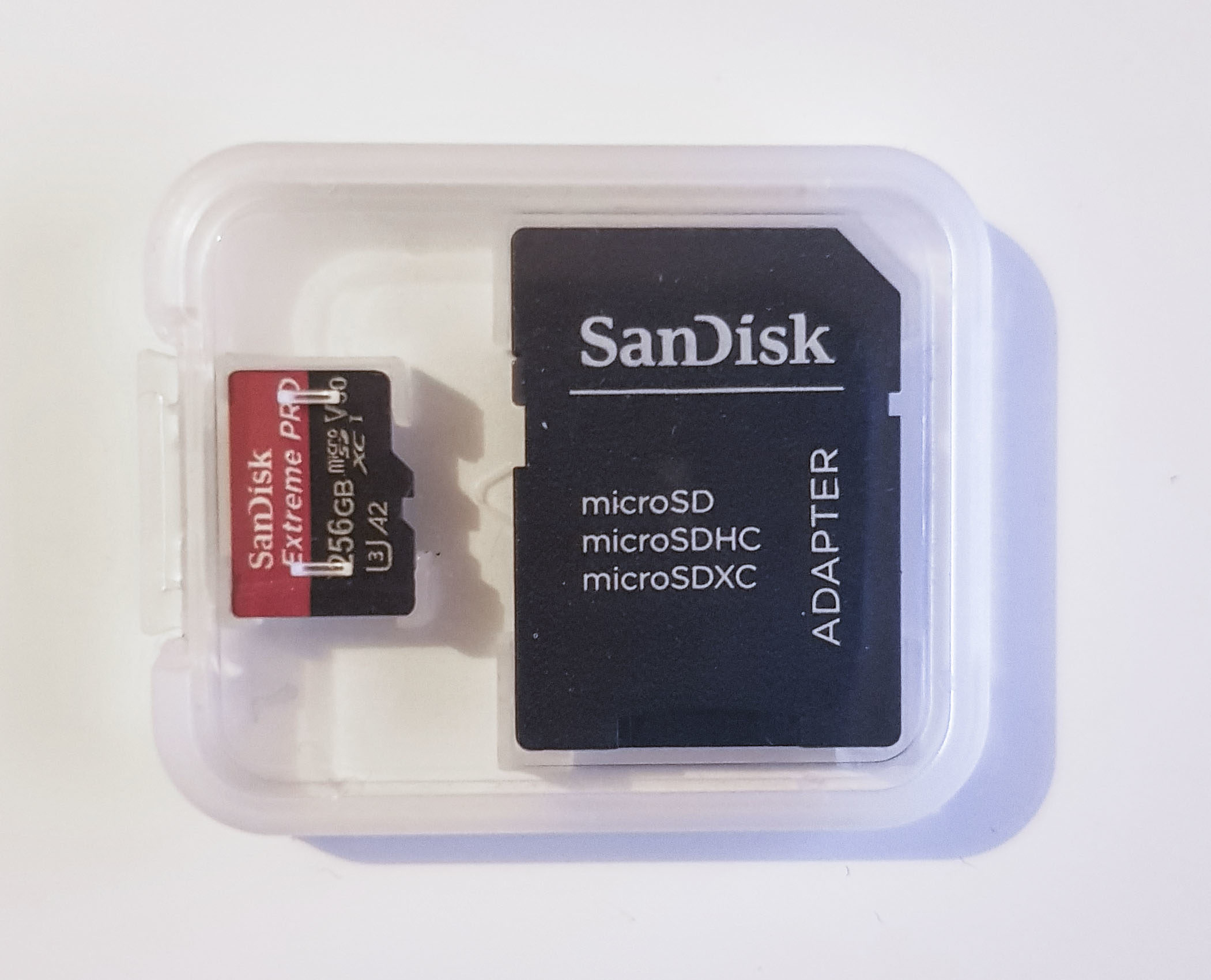 Also make sure that the back of the package contains information about the product such as its specifications and card speed, as well as all the appropriate labels, warranty info and a proper UPC, as shown below: 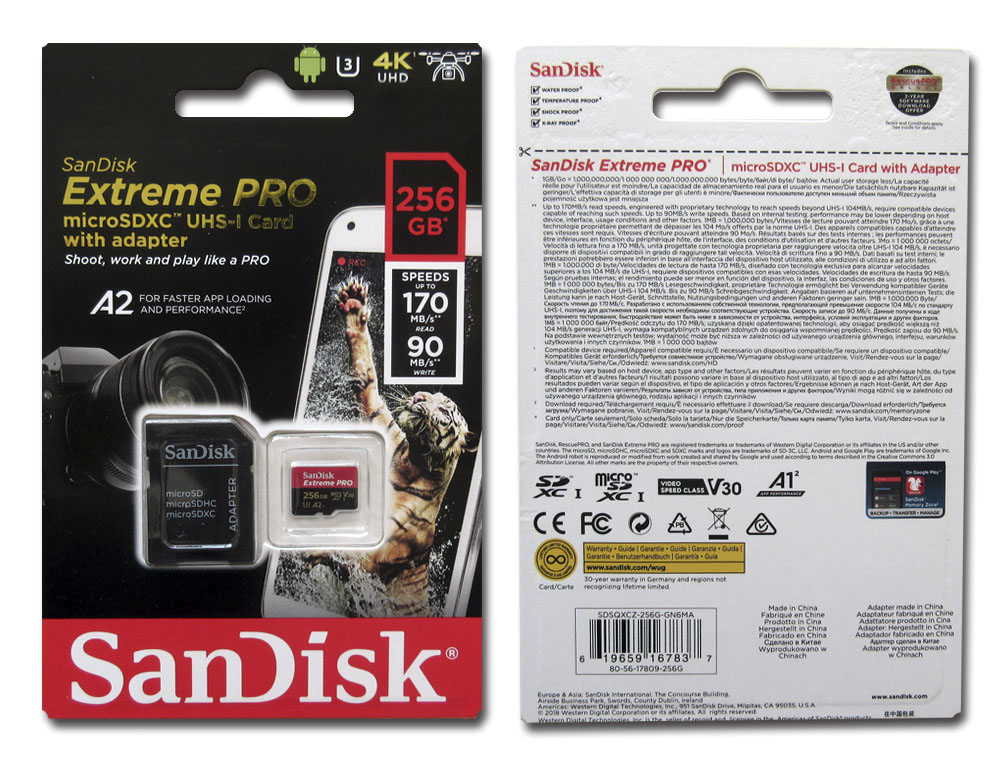 Keep in mind that if the package looks fake, the product itself is most likely fake.

If you don’t have the product packaging anymore, the next step is to visually inspect the memory card itself. Start with the front side of the memory card – Does the lettering are properly printed? Does the scales look coherent? Does the material seems with a good finished? Those are all signs of potentially fake memory cards. However, If you cannot find any long strings containing numbers or letters with numbers related with the serial number, the memory card is most likely fake. 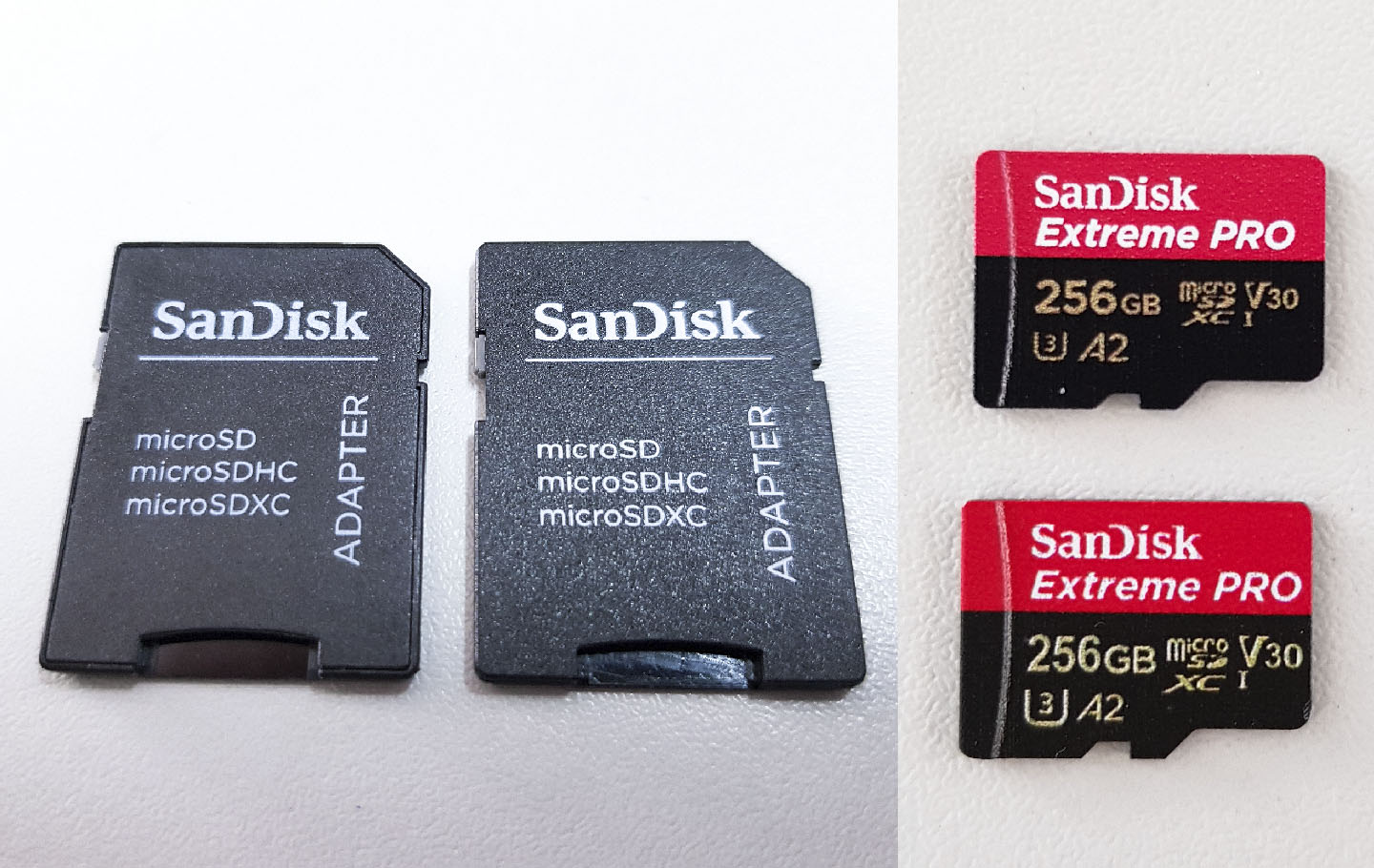 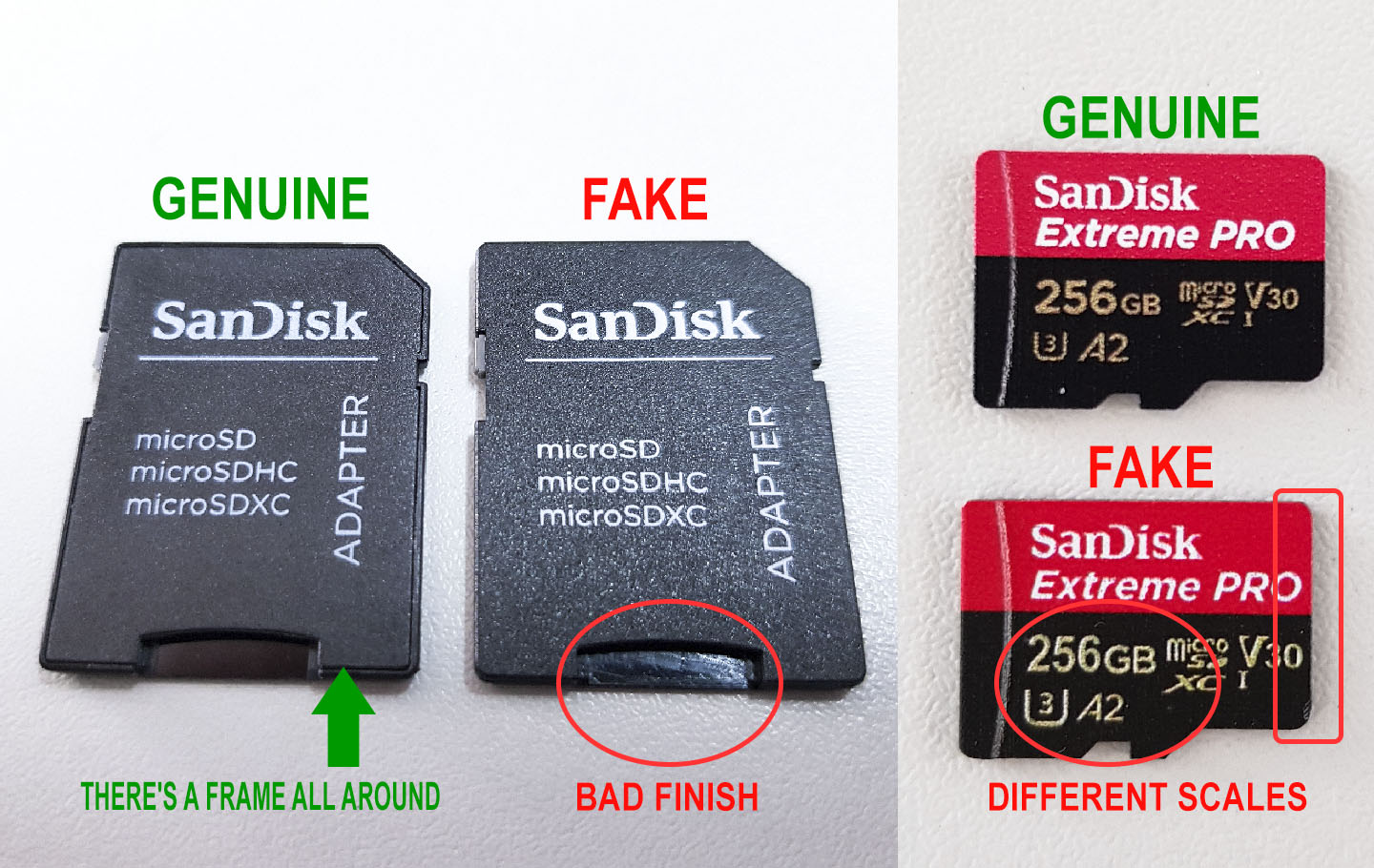 In my case, the fake card was so closely to the original, that I only really was able to discover the aesthetic differences side by side with the original one. From the back side we also can see a lot of diferences, especially in the materials and in the location of the serial numbers, as I show in the image below 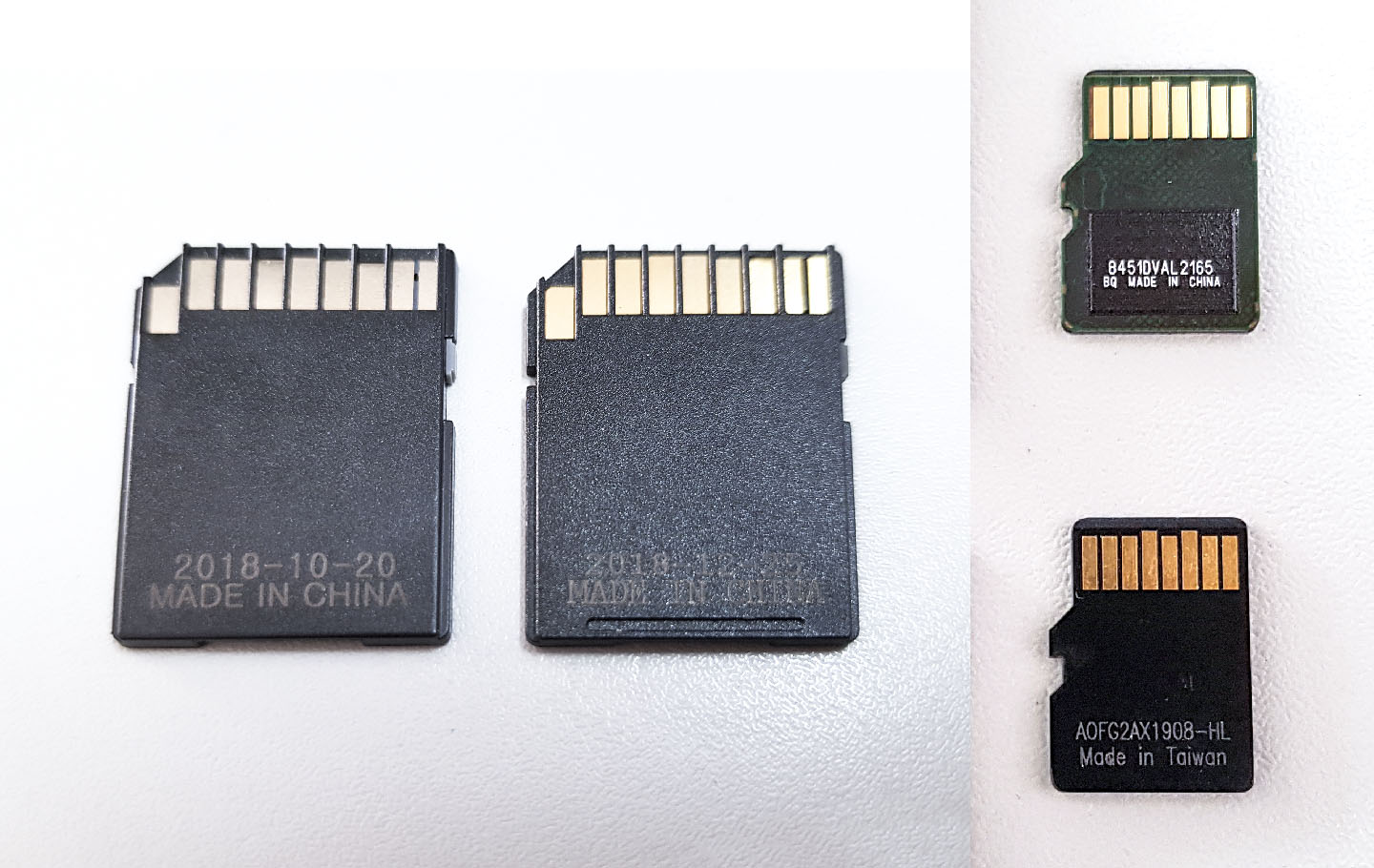 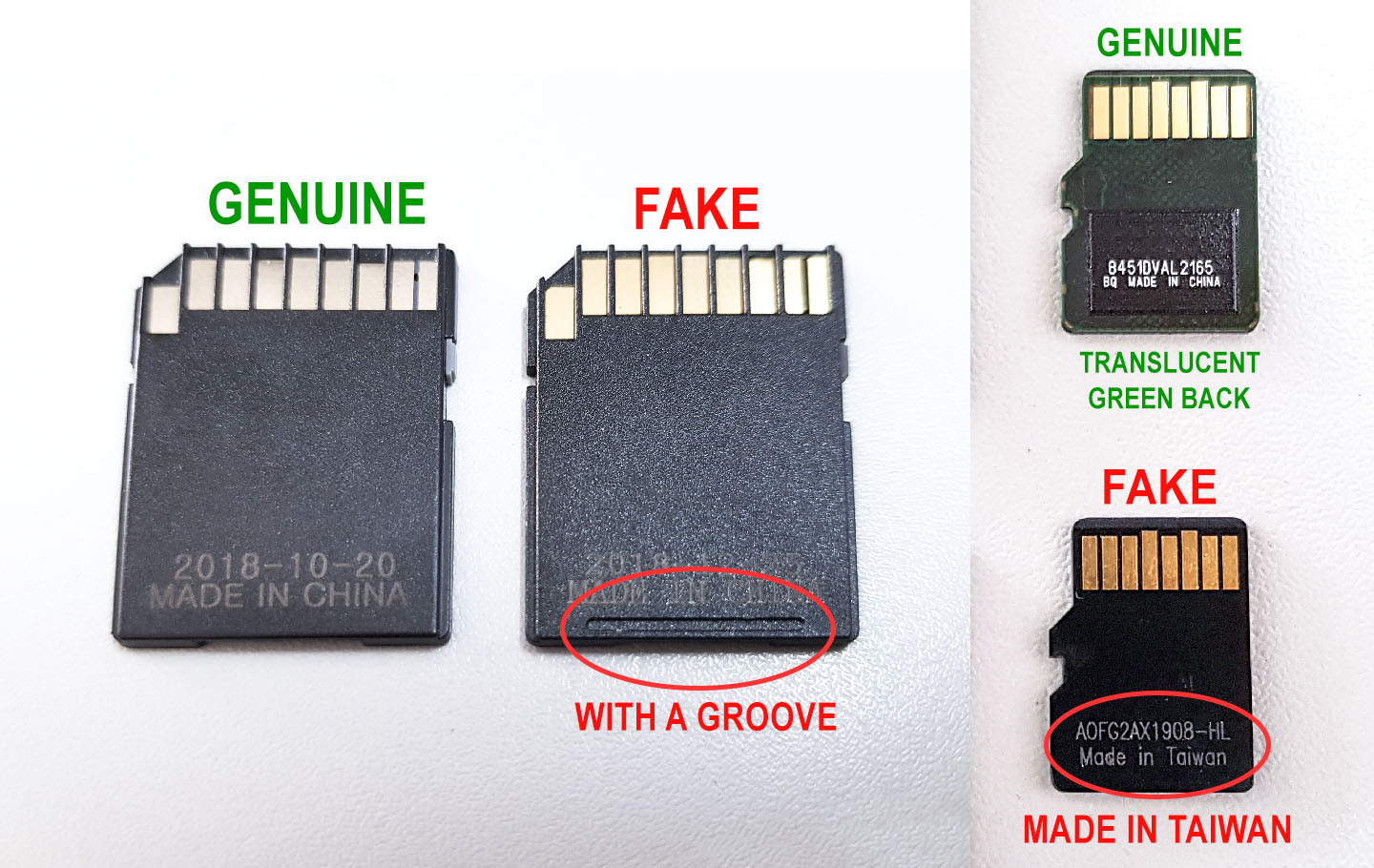 The location of the serial number will vary depending on memory card type and manufacturer. If you have a SanDisk card, take a look at this article, which details the possible location of serial numbers on its storage products.

Some manufacturers will include specific watermarks and other markings to differentiate their genuine products. For example, Kingston Technology uses “Colorshift Verification” to identify genuine vs fake products. If your Kingston memory card does not have such a feature, it is fake.

If still there is any doubts, this will be the litmus test and the most important from all, actually you can skip the first two, as this test will quickly reveal, in two minutes, if the memory card you are dealing with is real or fake.

In first hand you can start with a simple test on your PC, without the need of any software. Since most fake cards has a significantly bad performance compared to genuine ones, you can do a quick file copy test and observe if the performance is the expected, but before you start, make sureto either use an inbuilt SD card reader in your laptop OR use a good quality SD card reader plugged into a USB 3.0 or Type-C port, otherwise your test could be compromised. 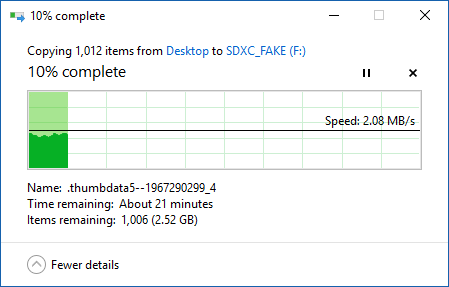 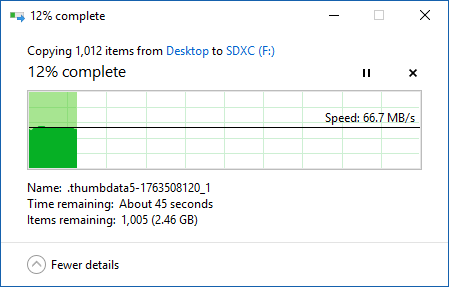 If you for any reason, still want to perform a speed test directly in the card, you will need to use third party software. There’s a plenty of them on the web, but I will mention only two, for windows and Mac, that does a decent job in the read/write speeds reporting: 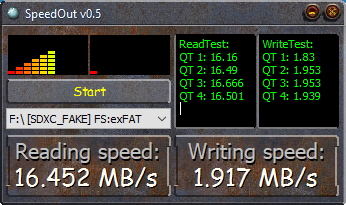 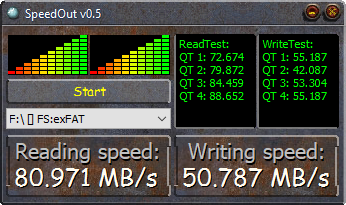 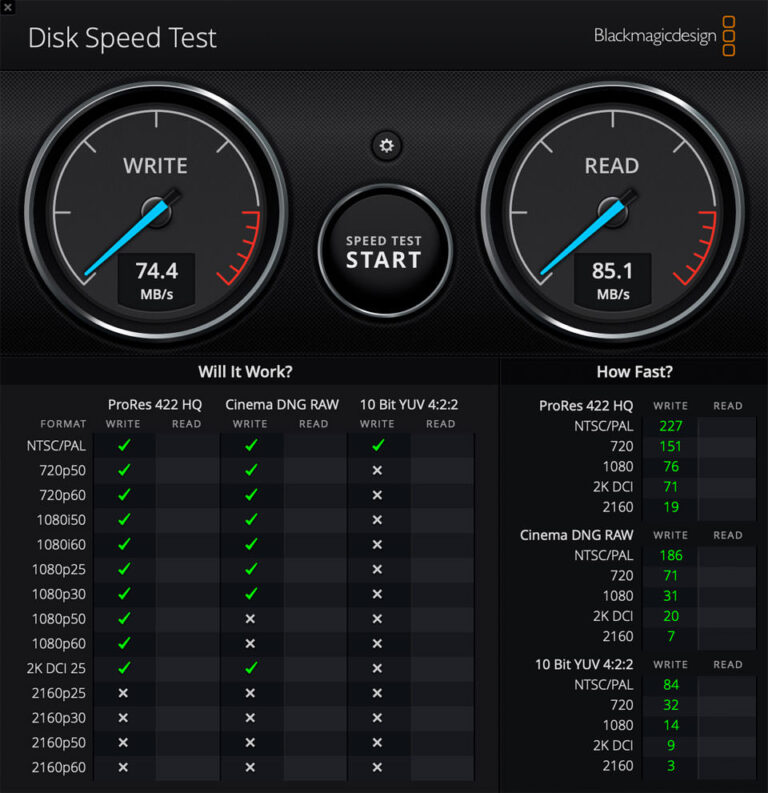 This software shows that the same memory card was able to achieve up to 74.4 MB/sec write and 85 MB/sec read speeds

To conclude this article, I leave here a summary of the four most important tips to take into account when buying a memory card:

Here I leave a trusted link from Amazon, where I bought the Genuine SD card that I present in this test

I hope this article is helpful and in the future will help you to identify fake memory cards. If you have any questions or concerns, please let me know in the comments section below! 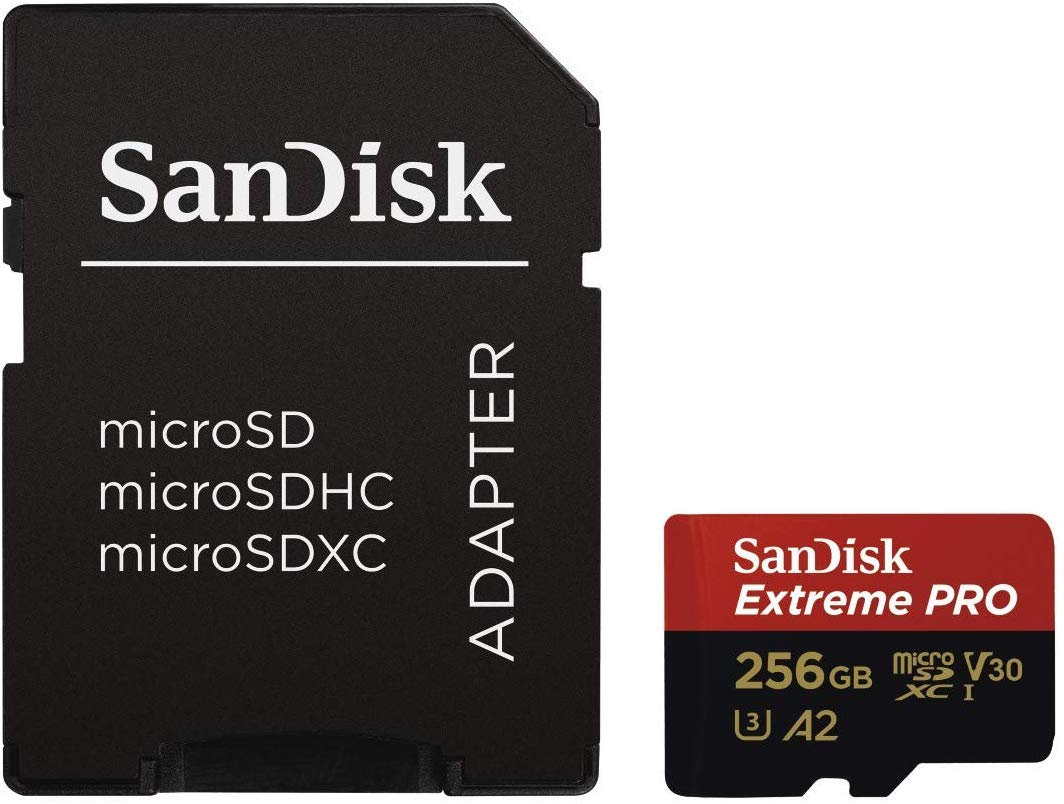 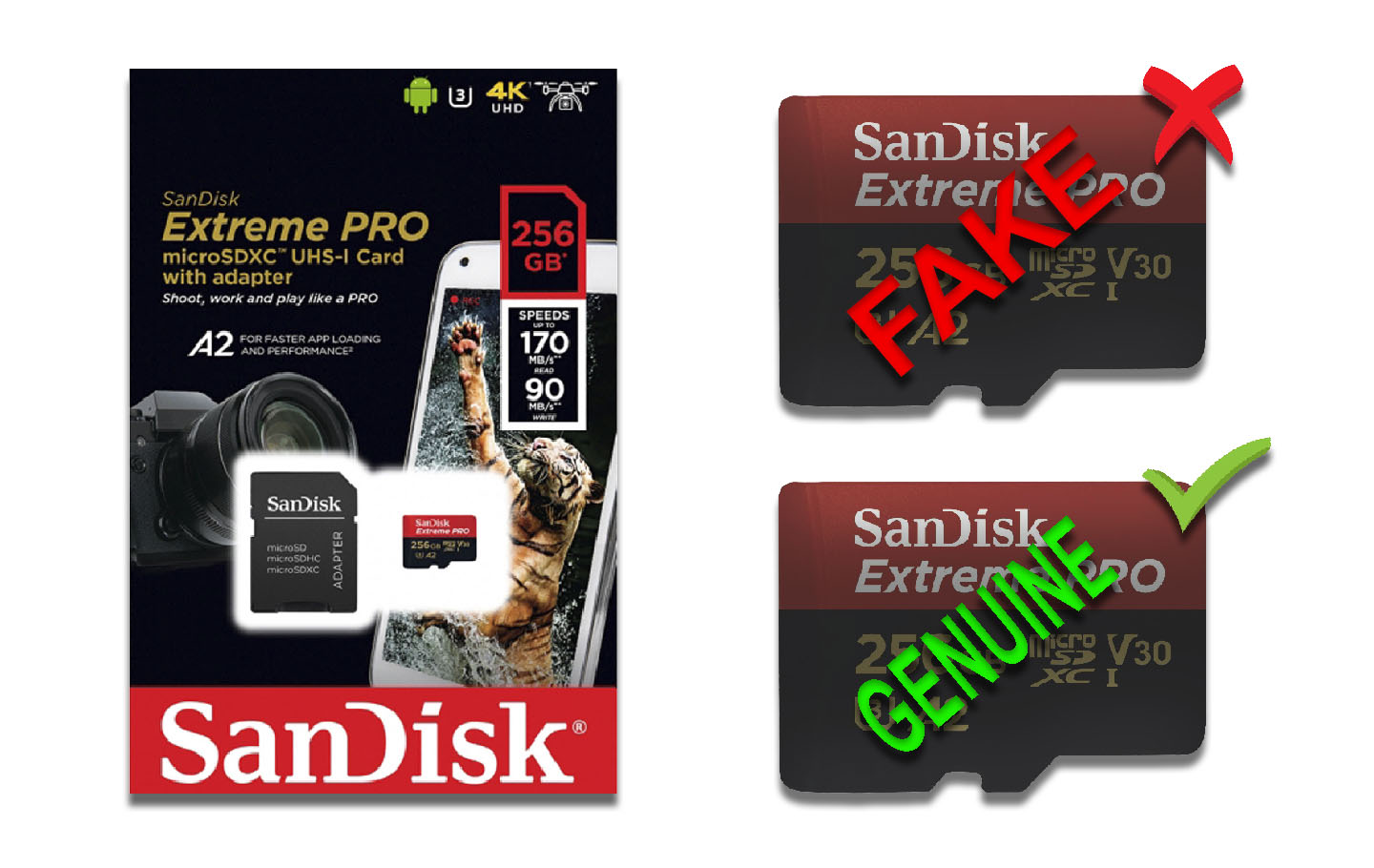 How to Identify and Test Fake SD Cards 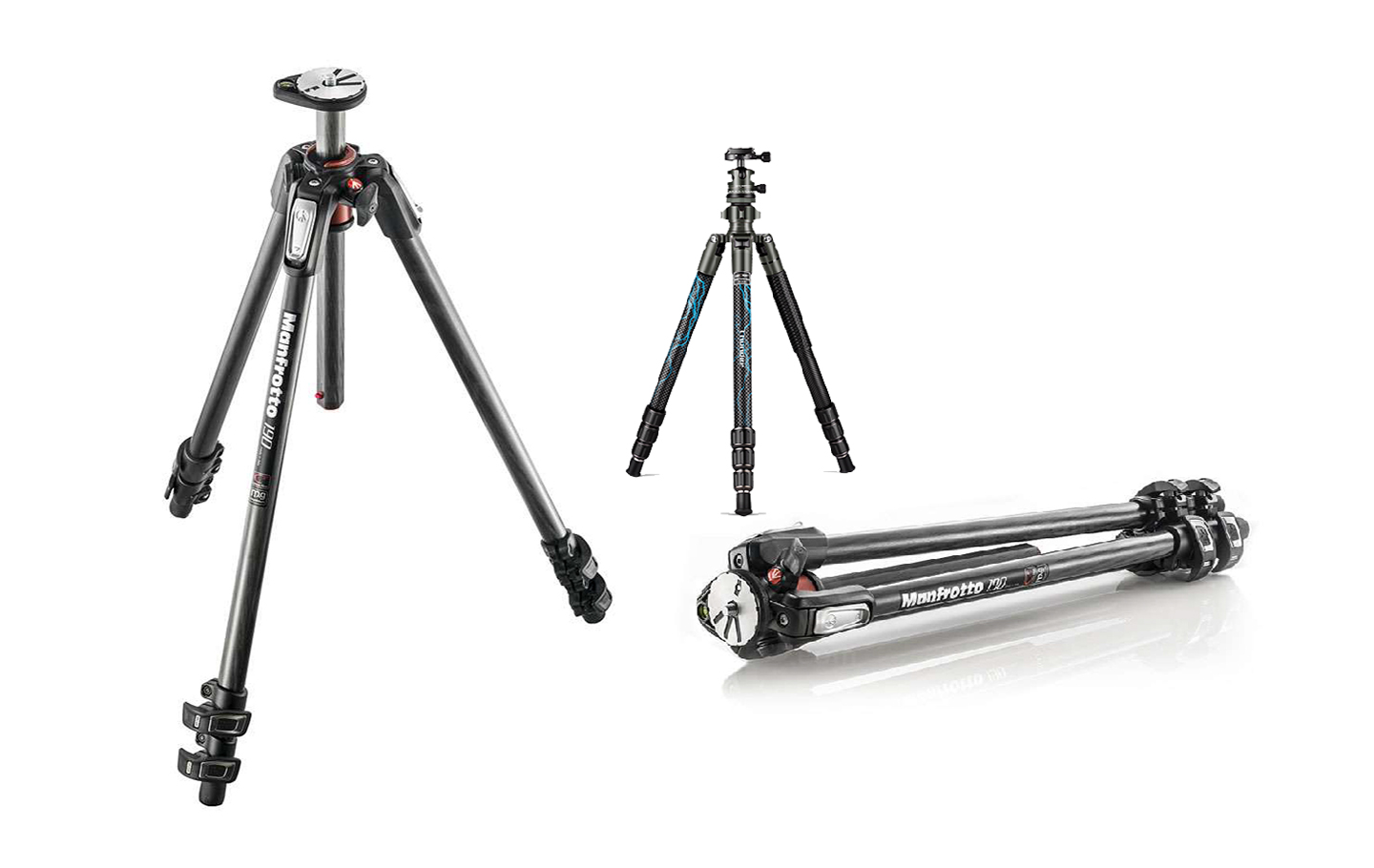 How to Choose and Buy a Tripod 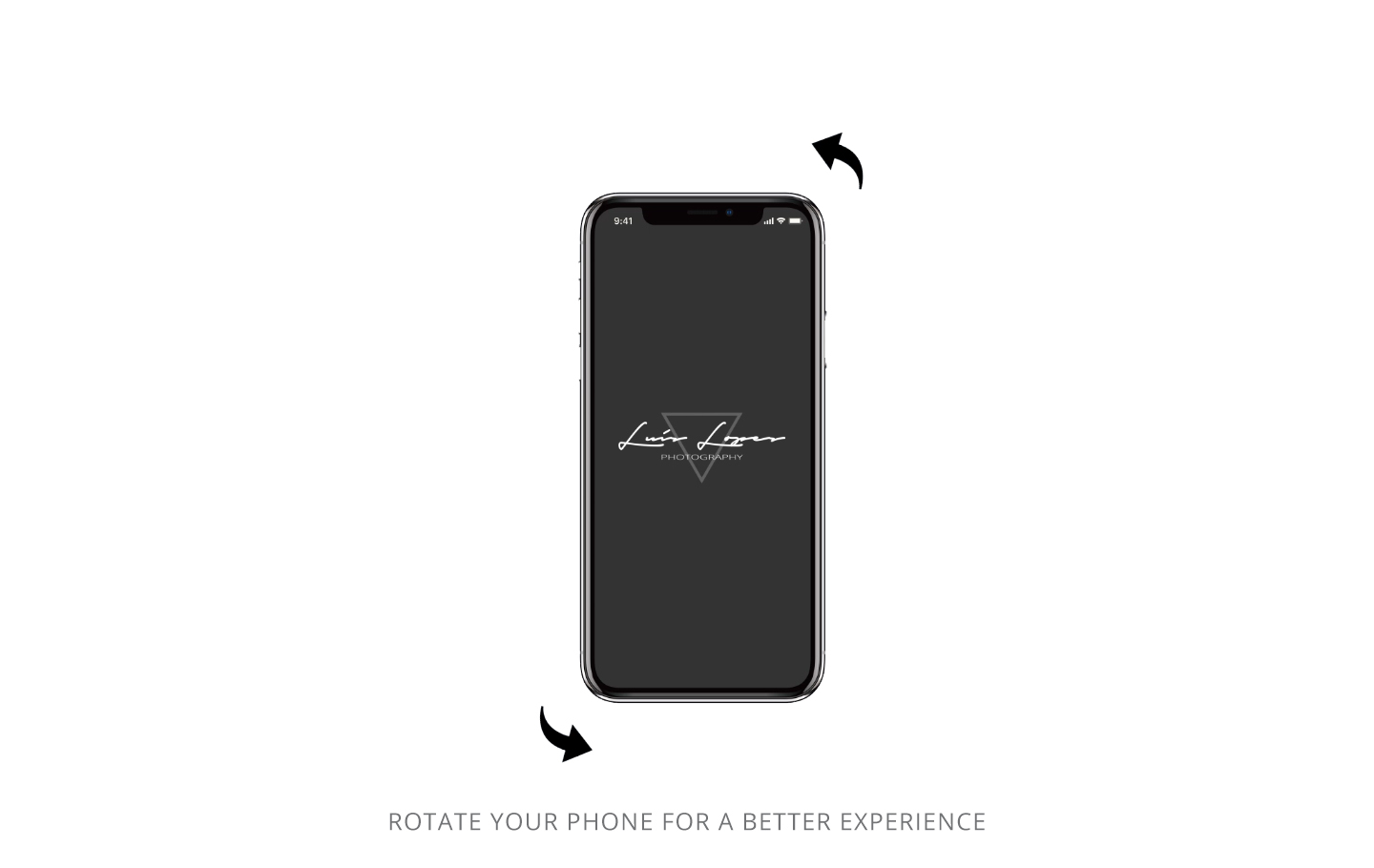